Thank you for joining CAPR on Zoom for the second in this informative series!
If you missed the webinar, you can view it at this link:
https://zoom.us/rec/share/_NIyD6DJxGRLXIng9m35VfYlO475X6a82yVI-_IJy0zhLxWb7YDcYyDI8oqeIT-6

Duane Davidson was elected as Washington’s 23rd State Treasurer in 2016. Prior to that, Duane was elected to four terms as Benton County Treasurer, serving from 2003 – 2014.  He is an actively licensed certified public accountant (CPA). 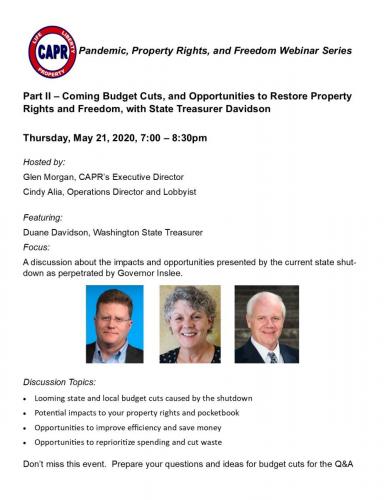 June 11th, 2020. This will be the last update to this article.  The point originally to write, research, and post this blog was to help inform and track what the governor was doing under the guise of an "emergency" proclamation, evaluate if his actions were within or above and outside of the law.

Guest column from We The Governed, by Glen Morgan

We all can recall the startling injustice the Sackett family endured, fighting to build on a development lot and being denied due to the presence of "wetlands".

From the Pacific Legal Foundation: Washington, D.C.; March 30, 2020: The U.S. Environmental Protection Agency has formally withdrawn an administrative compliance order it issued in 2007 against Michael and Chantell Sackett, removing the threat of crushing fines that the couple has lived under for more than a decade.

My well-developed sense of cynicism aside, I am pleased the 2020 Legislative Session has ended with Sine Die proclaimed after 8:00 pm on March 12.  I have read of rumors there will be a possible emergency session at some undefined time.  That aside, I have not experienced a more disheartening session since we began our lobbying efforts in 2015.  A sense of corruption, weakness, and agenda building permeates our state capitol.

There are two ways to deal with a problem, one is to work to create legislation and regulation factually based on actual, real, and measurable impacts, consequences, and effects on the citizens of Washington state, as do those individuals currently losing or spending revenue to solve the problem. Alternatively, the problem can be dealt with by driving emotional pleas and litigation enabled by building a base of those who have bought into the emotional landscape as acolytes of a distinct group of serial sue and settle organizations also referred to as the environmental cartel, those standing to benefit financially.

Early in December, the State Supreme Court quietly and somewhat contradictorily reversed a Superior Court Decision that disallowed King County's ordinance to charge a fee for utilities use of rights of way.

A tax by any other name…

On November 7, 2016, the King County Council adopted Ordinance 18403 to authorize the imposition and collection of rent from water, sewer, gas and electric utilities using county roads and rights-of-way.  According to the county the Ordinance would generate $10,000,000 yearly, which will be deposited to the County’s general fund. On December 29, 2017, the county Facilities Management Division adopted the rule for Determining Franchise Compensation to implement the Ordinance. The rule was effective as of January 29, 2018.